In just one month from now, on November 10th, I and my books will be in Brighton. The last of my bookish goodies have arrived–just in time for me to show them off!

Besides my books, here’s what I’ll bring: 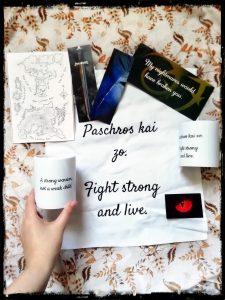 An A5 map of the world from RELICS OF AR’ZAC: 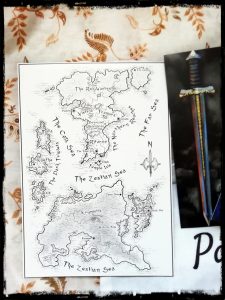 Mugs with quotes from RELICS OF AR’ZAC and DARKENED LIGHT: 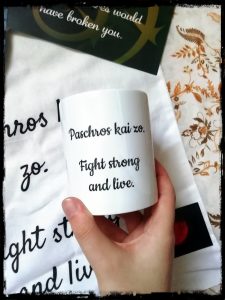 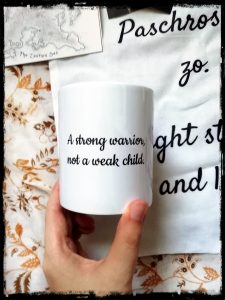 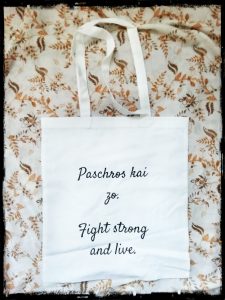 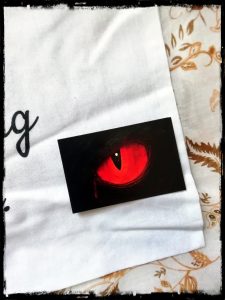 And, of course, bookmarks: 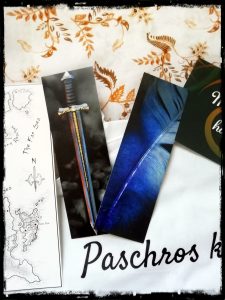 Stock will be limited since I can only carry so much, so please let me know in advance if you’re interested in any of the above 🙂 I’ll set some aside for my next mailing list giveaways too.

Will I see you in Brighton? If you haven’t got your tickets yet, you can book them here. You can also make sure I’ll have books ready and waiting for you by reserving the ones you want here.

It’s only the fifth of October but it’s already been a huge month for me: on Tuesday, I told my manager that I’m leaving. From January, I’ll officially be a full-time author and editor.

And that’s terrifying as well as exciting.

(I have a lot of feelings right now, tbh.)

Most of my goals this month focus around preparing myself for full-time self-employment, so I’ll stick to the interesting bits 🙂

With RISE OF THE SPARROWS with my editor and BLOOD OF THE DRAGON with my critique partners, I’m focussing on SHADOW IN AR’SANCIOND. I’m in the middle of the first read-through. Once that’s done and my critique partners are done with Book 3, it’ll go straight to them.

Not long ago–maybe two weeks?–I told my SO I wouldn’t be doing NaNo this year. I took part last year even though I didn’t have the time and failed miserably, and this year is looking even busier.

I’m not saying I’ve changed my mind, BUT I’ll be doing my own, smaller, unofficial NaNo challenge. It doesn’t matter if I ‘win’. Any words are better than nothing, and if I have the NaNo bug anyway I may as well put it to good use *shrugs*

I’ll be writing BLOOD SONG and BLOOD VOW. My cover designer is cracking on with the covers, so it’s high time I did my part too! No pressure and no guilt if I can’t finish both. Whatever happens, happens <3

I’m working on some freebies for my mailing list subscribers. My ARC team gets free books, so it didn’t feel fair that my other list isn’t getting anything.

I’ve got quite a few RELICS OF AR’ZAC character insights coming your way as well as two short stories, both exclusive to this list right here.

I’m hoping to make the first freebies available next week, so keep an eye on your inboxes or subscribe here 🙂

What are your goals for October? Make a tea and chat with me! <3

September didn’t quite turn out as I expected, but in a good way. Many big changes are coming, and my new author website right here is one of many exciting new developments.

Since my original plans went to hell pretty much the day after I shared them back on CookieBreak, I won’t bother to go over them again now. Hardly anything stayed the same *shrugs*

BLOOD OF THE DRAGON  is with my critique partners and their feedback is looking good. Once they’re done and I’ve applied the changes, it’ll go to my editor – a note on why it’s not my next project in a moment.

I decided to let the BLOOD WISP trilogy rest for a little while longer and focus on SHADOW IN AR’SANCIOND instead. The prequel novella is out next after BLOOD OF THE DRAGON, after all, so it made sense to do this in order.

But one of the biggest decisions I made this month regards RISE OF THE SPARROWS, my debut novel.

Some of you may know that I’ve regretted only getting it proofread pretty much ever since I published it. I’m not happy with that–you deserve better, the book deserves better, and I need to do better. Perfection is an illusion, but that doesn’t mean I can’t do everything within my power to make this book shine. I didn’t back in 2016 when I first published it, but I am doing it now.

I’m re-publishing it. It’s with my editor now for the developmental edit it should have had in 2016. I’m annoyed with myself for not doing it sooner, but such is the naivety of new writers. Live and learn, eh?

This may come as a surprise to you if we ever talked in person before. I’ve always been adamant that, while RISE OF THE SPARROWS has some smaller mistakes, it’s the best I could do at the time and I’m proud of my humble beginnings.

This is still true, but if I want to be a professional (spoiler alert: I do) then what I want doesn’t matter as much as what my readers deserve. You deserve a great book, not a good one. My pride has nothing to do with it; therefore, there was only really one option.

My cover designers have begun work on this trilogy. I can’t wait to see what they’ll come up with so I can share it with you!

They’re taking a little longer with it since they’re designing the whole trilogy plus the paperback, but I’m hoping to have a cover reveal by the end of October 🙂

I’ve been stocking up on my bookish merchandise, and am excited to say I’ll be bringing mugs, tote bags, bookmarks, and flyers with me–all RELICS OF AR’ZAC themed, of course!

My next giveaways will profit from this as well 😉

If you haven’t booked your tickets yet, you can reserve them here.

It’s time for the first cover reveal of the new site! If there’s a better way to christen a new author website, I don’t know it ^-^

You may want to sit, because this one is *gorgeous*.

Behold the cover for SHADOW IN AR’SANCIOND: 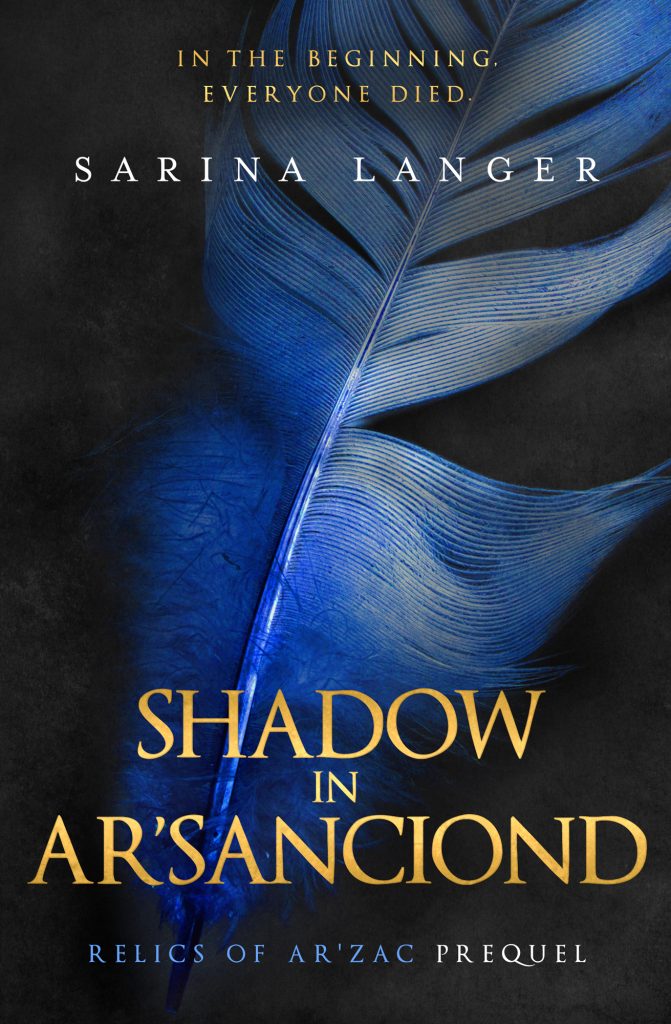 “In the beginning, everyone died.”

Sanciond is the magic capital of the North and home of the sorcerers watching over the country of Ar’Sanciond. With a library covering every subject imaginable, only one line of research is forbidden:

The study of the Mists, cradle of all evil where no light can dwell.

Sorcerer Eldon is granted permission to lead pioneering research into the Mists, but what he finds there—and what he unleashes—threatens the very fabric of Ar’Sanciond.

Sorcerer Vail, Seer Mavis, and Head Sorcerer Felan are the only ones who notice their friend’s changed energy. Only quick covert action can save Sanciond…

… But not all plans are meant to succeed, and not every story has a happy ending.

As always, the credit goes to my amazing cover designers at Design for Writers.

I can’t wait to share this prequel novella to the RELICS OF AR’ZAC trilogy with you. Expect it next year, a month or so after the trilogy concludes with BLOOD OF THE DRAGON 😉

See what I’ve been up to:

Happy Monday and good morning, friends and bookworms!
.
I feel like it’s been a while since I’ve shared my weekly spread, so here you go ☺️ Not pictured are my notes and habit tracker on the right, but if you want to see them, I’ll share them in my stori… https://instagr.am/p/CFZGbJng_YA/

I’m about to turn social media off again for the weekend. Have a good one, friends and bookworms!
See you on Monday 🙌

This may be the coolest thing I’ve seen this year 😍😍😍

I’ve never quite been the same since I learned about trovants. These are rocks, actual rocks, that not only ‘grow’ but MULTIPLY.