Rise of the Sparrows

A cursed omen who dreams of death. A girl who calls fire with a wish. A group of resistance fighters who need the king to die.

Prophecy has brought them all together, but will it destroy them, too?

As a homeless orphan, shunned for having the gift, Rachael knows how to survive. The visions of people dying are only hers to see. The shadows are her safety. When Cephy comes into her life, having a friend who is as feared by the villagers as Rachael seems too good to be true.

After a fiery incident, the villagers call on the White Guard to execute Rachael and Cephy. Together, they flee into a world they know nothing about. In the unknown await a Mist Woman, a prophecy, and a young rebel who sounds sincere, but in Rachael’s experience, no one ever is.

The Sparrows–fighters of the resistance–believe in her because a prophecy names her, but can she be the leader they need when she can’t control her own magic?

Rachael knows the struggles the gifted endure all too well. Perhaps it’s time she stopped hiding and fought back.

Rise of the Sparrows is the first book in an epic fantasy trilogy.

If you like surprising plot twists, kickass heroines, and dark destructive magic, then you’ll love the first installment in Sarina Langer’s page-turning series.

If she could change their fear into hope she would, no matter how ridiculous she felt in a dress and crown.

Once a despised street rat, now the reigning queen of Rifarne, Rachael is at the centre of everyone’s attention. All she wants is a few peaceful moments to herself—

but her kingdom has other plans.

The Tramuran ambassador unnerves her.

The Krymistian lady is hiding something.

A Mist Woman brings her a gift, and a warning: Aeron’s death has released the Dark One’s shades into the world. And Rachael, as the only living seer in existence, is the only one who can stop him before he destroys everything she’s beginning to cherish. But can Rachael trust the Mist Woman, or is Kaida just another sorceress playing with her life?

There’s a chance that answers are hidden beneath the ancient Krymistian ruins of Archos.

If only she could be sure that her nightmares of Cephy are just that, and not something darker…

Rachael is running out of time. The shadows are coming, and their claws are reaching for her.

Wardens of Archos is the second installment in Rachael’s quest to bring acceptance to the magically gifted.

If you like fast-paced epic fantasy, ancient magic, secretive dragons, and a diverse world, then you’ll love the next novel in Sarina Langer’s trilogy.

Blood of the Dragon 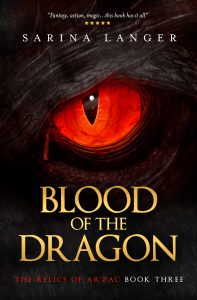 And so she took one step at a time.

Without ever looking down.

Rachael’s worst nightmare and feared vision has come alive. Imprisoned on Kaethe in the Dark One’s temple, guarded by shadows, she can’t do anything but wait for death.

If only she could force her visions, or contact Cale and her Sparrows… but she’s never been able to control her gift, and her only friends are an ocean away, unaware that Rachael’s been kidnapped.

Even worse nightmares rise from the shadows. The Dark One grows stronger every day, and He’ll destroy the world if Rachael doesn’t find a way out.

To do that, she needs to force her visions, break the Dark One’s barrier on her mind, master her gift, and find a dragon willing to shed its blood for humanity…

But will it cost Rachael her life, her sanity, or both? 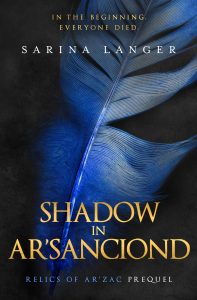 In the beginning, everyone died.

Sanciond is the magic capital of the North and home of the sorcerers watching over the country of Ar’Sanciond. With a library covering every subject imaginable, only one line of research is forbidden:

The study of the Mists, cradle of all evil where no light can dwell.

Sorcerer Eldon is granted permission to lead pioneering research into the Mists, but what he finds there—and what he unleashes—threatens the very fabric of Ar’Sanciond.

Sorcerer Vail, Seer Mavis, and Head Sorcerer Felan are the only ones who notice their friend’s changed energy. Only quick covert action can save Sanciond…

… But not all plans are meant to succeed, and not every story has a happy ending.

Shadow in Ar’Sanciond is the prequel novella to the Relics of Ar’Zac trilogy but can also be read on its own.